One of my favorite stories of #RestlessRenewal comes from the history of the B-17 bomber and the invention of the flight checklist. Born from tragedy, this simple document helped launch the “Flying Fortress”, one of the key elements to the Allied victory over Germany in World War II.

If you’re not familiar with this story, in October 1935 the United States military conducted a flight demonstration at Wright Field to determine who – Martin, Douglas, or Boeing – should manufacture the next-generation bomber.  Arriving at the demonstration from Seattle in nine hours and three minutes, the Boeing B-17 was – by far – the fastest, most capable plane under consideration. Dubbed “The Flying Fortress” for its massive size and ordinance, Boeing’s B-17 was a state-of-the-art aircraft with technologies never-before-used on a bomber, including four adjustable-pitch propellers and electronic controls. 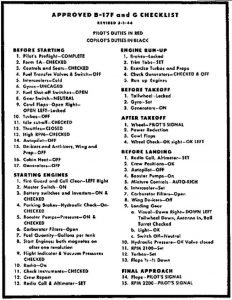 On demonstration day, a crew of five commanded by Major Ployer Hill launched the B-17 gracefully into the sky. The plane lifted to 300 feet before tipping sharply and tragically crashing into the ground. An investigation found that Major Hill had been preoccupied with the various controls and neglected to release the rudder and elevator brake. Many believed the plane was just “too complicated to fly”.  The military canceled all orders for the B-17.

No pilot had better training or preparation with the B-17 than Hill, yet an overlooking a routine step had cost the crew their lives. Faced with near ruin, Boeing turned military convention on its head and prepared a step-by-step flight manual to ensure the aircraft’s safe operation.

With the B-17 checklist in hand, pilots subsequently flew 1.8 million testing miles over 13,000 hours without incident, creating one of military aviation history’s most impressive safety records and – in the process – established a new benchmark: the flight checklist. More than 12,000 B-17s would be ordered for flights during the WWII era, with American air commander Gen. Carl Spaatz said, “Without the B-17 we may have lost the war.”

Today it’s difficult to imagine complex processes without checklists. It’s not that we are stupid or lack the aptitude – human brains can hold up to 4.7 million books in their memory. The real problem is retrieving that information accurately and when we need it. It’s a problem of effort and attention. This is where checklists come into play. From launching astronauts into space to surgical procedures, the checklist is a de facto safety net to ensure critical items are not overlooked.

What if we applied this same process map to more routine tasks? Adding a basic checklist to everyday tasks can eliminate both defects and rework. Take, for example, the mundane task of replacing the toner cartridge in an office printer. We (generally) know to open the printer, remove the old, open the new, replace the cartridge, and get back to work. But one of the most beneficial steps in the process can be overlooked: repacking the empty cartridge for recycling. For companies with recycling programs, this miss not only creates more waste but can lower rebates that contribute to greater profitability.

A checklist for creating checklists

Daniel Boorman, a veteran pilot working for Boeing and the technical lead for the development of the 787’s pilot system of checklists, has worked with the FBI, the World Health Organization, and many more, wrote a set of recommendations, that I’ll paraphrase:

Look around your daily routines:  where can you and those you lead benefit from a checklist? What is your B-17 checklist moment?

For more on the story of the B-17 checklist and how the same principle has been used to increase efficiency and save lives, I recommend the book THE CHECKLIST MANIFESTO by Atul Gawande, available in print and Kindle formats from Amazon.com.

As hotel booking technology continues to advance, the next widescale trend to emerge in hotel reservations and hospitality marketing may be attribute-based reservations.

Traditionally hoteliers have built room pools based on a single characteristic, such as bed type. This has largely been the extend of attribute offerings due to limits in reservation technology; however, with new investments in res engines and blockchain, the reservation system of the near-future will be able to offer extensive customization to guests.

Instead of selecting just a king bed room with the hotels standard amenities, guests may be able to specify a king room, near the elevator, with a four-piece bathroom, a sunrise view, an elliptical machine and a large club chair. Clearly this represents an extensive revenue opportunity for hoteliers, as well, to package unique room features and amenities to create more personal experiences for guests.

Beyond direct customization revenue, the broader opportunity to hotels will come from direct channel maximization, just as airlines have done with seat selection. Customization offered exclusively through branded hotel websites and apps would be a significant marketshare play against OTAs and room-sharing services such as AirBNB.

A new report published by Skift.com details the travel habits and mindset of affluent Americans. Among the findings: Affluent Americans make up just 20% of the U.S. population, but they account for 51% of total travel expenditures. The Skift report – which is available online for reporting subscribers – also looks at a sub-segment of the affluent travel market: the “Super Affluent” (those with a combined household income over $200,000) and how their travel differs from the less affluent travelers.

The full report is available for purchase at Skift.com.

Resolutions and Introspection: 2018 and the Holstee Manifesto

The new year brings opportunities for introspection and resolutions. For me, that means trying to live the words of the Holstee Manifesto.

This is your life. Do what you love, and do it often. If you don’t like something, change it. If you don’t like your job, quit. If you don’t have enough time, stop watching TV. If you are looking for the love of your life, stop, they will be waiting for you when you start doing things you love. Stop over analyzing, life is simple. All emotions are beautiful. When you eat, appreciate every last bite. Open your mind, arms and heart to new things and people, we are united in our differences. Ask the next person you see what their passion is, and share your inspiring dream with them. Travel often; getting lost will help you find yourself. Some opportunities only come once, seize them. Life is about the people you meet, and the things you create with them. So go out and start creating. Life is short. Live your dream and share your passion.

Here’s to the relentless pursuit of our greater self!

If you travel frequently, it’s quite likely that you know the entire safety speech of your favorite airlines by heart. They are routine… mundane… ordinary. Delta made headlines a few years ago by re-imagining the airline safety speech with internet memes.

As marketers, it’s important to remember that our most important messages can become routine to customers. With repetition, they fade into insignificance. It’s critical that we challenge our perceptions of what “must be” and innovate with what “can be”. That is the art of #RestlessRenewal.

Kudos to Quantas Airlines for their beautiful, inspiring re-invention of the flight safety video. I’ve watched the entire clip time and time again to remind myself to challenge convention and re-imagine the ordinary.

What are your favorite examples of re-imagining the ordinary?

Do all things with love

"Do all things with love." – Og Mandino

Marketing: Be Your Own Brand

New data from the Bureau of Economic Analysis shows consumer spending on hotels and lodging is booming. From 2011 to January 2017, consumer spending on lodging has increased 41.8%, outpacing other sectors. The food-and-beverage sector came in second, growing 31.2% for the same time period.

With the US economy nearly full-employment and consumer debt levels down, a potential uptick in wages would likely extend this boom trend for hotels well into 2018.

Analysis Shows Hotels Are Not Losing Share to AirBNB

The Superhost market makes sense. I’m sure there are many AirBNB hosts (and potential hosts) who would prefer to have someone else handling the transactional minutiae of hosting.Â For AirBNB, superhosts could deliver a greater inventory and open access in large metro markets by lowering the barrier to entry for new hosts.

However, I can’t help but think that superhosts may kill AirBNB’s brand. After all, the “secret sauce” for AirBNB has been the direct relationship between guests and hosts. A superhosts isn’t going to greet a guest and introduce them to an unknown taqueria, after all. If AirBNB removes that connectivity and endorses greater separation between host and guest, the next step is likely to be commoditization.

It will be interesting to watch this trend over the next few quarters for any hint of guest backlash, especially in gateway cities.

The loudest voices seem to be those whose purpose is to highlight the worst of us for their own ends. But - every day - there are thousands of examples of charity, goodwill, kindness, and love. Amplify the best of us. #ChooseLove