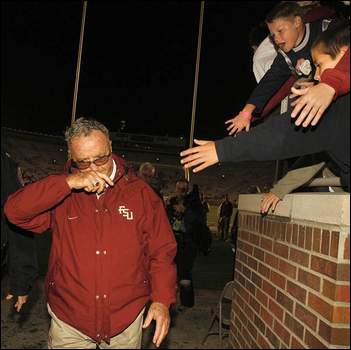 I watched every excrutiating minute of the ass-whipping Wake Forest put on FSU last night. While those of east of the Mississippi got a reprieve when ABC cut away to Texas-Kansas State, I had my handy satellite GameDay coverage so I didn’t miss even one missed tackle, busted coverage, poor play call or interception. (Note to self: cancel satellite).

I’ve posted my thoughts over at Fanblogs (Wake hands Noles first home shutout loss in Bowden Era), but it boils down to this:

To fully describe the whipping FSU took would exhaust the adjectives rarely used to describe a Bowden team. Exhausting, humbling, embarrassing… and on and on it goes. Last year’s ACC champions are now ACC chumps – likely finishing the season… ((gulp))… in a last place tie with Duke.

Unfortunately, there are just too many questions and too few answers. Wholesale changes are needed at Florida State. The game has not passed Bobby Bowden by, but his intense loyalty — an admirable character trait — may be his downfall. As much as it pains me to say it, Coach Bowden has to lead the change or step aside.

About a week ago

RT @NASA 🌕 The window is closing soon to send your name around the Moon. Sign up for free and get a custom boarding pass for the @NASAArtemis I flight: nasa.gov/wearegoing pic.twitter.com/y0yE…

About a week ago

RT @USTravel Thanks @AmericanAir for supporting the Honor Flight Network & flying the 𝟮𝟱𝟬,𝟬𝟬𝟬𝘁𝗵 veteran to Washington, D.C. for a memorable trip to visit our nation's capital & memorials dedicated to their service! 🇺🇸✈️ Thank you to all our nation's veterans! bit.ly/honorflightpr…

As more Americans are traveling, this is a good read. Having traveled internationally several times during Covid, the most important piece of the plan is actually having a plan. twitter.com/nytimest…